So, with 2 hours of sleep we took turns driving and hightailed it to Berlin. Destination: the Marriott hotel. Hello sheets, hello king size beds! Hahaha...

Berlin was not what I expected. Having been to Franfkurt, I was anticipating a city with a tall and distinct skyline. However, no buildings we saw were more than five or six stories high. On our way to the hotel this is the tallest thing we saw: 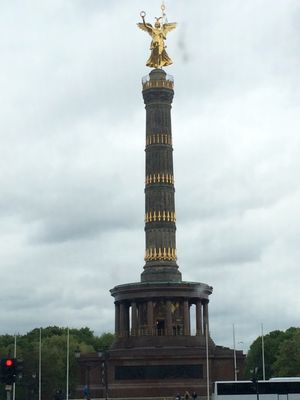 Berlin Freedom Tower In Germany there are very few skyscrapers. Most of them are in Frankfurt, and many Germans have told me that city is their most modern, and the closest thing to an American city. However, the charm and history is abundant. Our hotel was close to the Berlin wall, and it is hard to miss! We were also near checkpoint charlie. We spent our two days walking around. We enjoyed the shops, restaurants, cathedrals and Concert House of the Gerndarmenmarkt. As with most of the city, the buildings were heavily damaged or destroyed in World War II, but have been rebuilt.

At the Berlin Wall

Konzerthaus Berlin
Eric and I spent some time in the Hackeshermarkt neighborhood, which reminded us a bit of New York's SoHo: lots of cafés, indy clothing stores and trendy restaurants. In a vintage clothing store, I almost talked Eric into buying an old leather motorcycle jacket from the 50's... The food and beer were fantastic! We found a nice Italian place near our hotel, where the beers were HUGE! Quite a change from the tiny 8 oz glasses the Dutch use. Find someone who speaks Italian, and Eric comes alive! He is so happy to be able to speak his favorite language with people that understand! Somehow he talked the staff into thinking that we were some massively famous band. At the end of the night we were all best friends!

Eric found some chocolate for dessert. We did some laundry, and were well rested and ready for the final shows of the tour in Poland. Our first stop was Poznan for a gig at the Alligator Club in the city center. This is where we had a day off on the last tour and we knew our way around. Our first stop was the Stary Brower mall where I needed a chip for my iPhone. We mainly used our phones for navigation in Europe. Being a Verizon customer, my only option for international coverage was extremely expensive: $25 for 100 mg of data! Yikes. So I bought a chip and data plan in each country. It was a pain in the ass to switch chips every time we crossed a border, but I did get the best reception possible (IMHO) and it ended up costing me a lot less than the Verizon plan. It is important to be able to connect with family and friends easily over there. And of course, we needed to Google and Wiki the things we saw or were curious about. There is so much history in that part of the world; we were constantly learning! The last time we played Poland, we were well received and this time was no exception. Even though our first two shows were booked at the last minute, we had great turnouts. We saw a lot of familiar faces from our last gigs there.

At the Alligator in Poznan The day after our first gig, we had some time to walk the city center and shopping mall. European fashion can be a bit different; somehow they can pull-off things we would never wear, like this jacket!

I dare you to wear this

We are lucky that most young Polish people speak English- it really helps! However, there are some unfortunate word usages that may confuse Americans:

First rule of Fart Club: Don't admit that you did it.

Our next show was up to the north in a town called Trzcianka (try to pronounce that!). We played a venue called the Cactus Bar, made to look like it was in the American Southwest. I felt right at home in my cowboy hat. We played a great show and the place was packed.

Then we headed down south to play Victor Czura's radio show called Blues Attack! in Rzeszów. We had never been there before. It is the largest city in southeast Poland, and isn't too far from the Ukraine. Victor put us up in the posh Hotel Prezydencki, and treated us all like kings! I was under the impression that we would be playing in a small studio like I have done so many times before - with minimal microphones and challenging setups. However, they have a huge performance hall in there, complete with a studio audience!

After the show we hung out with the editor of the big Polish guitar mag, Gitarzysta. They did a three page spread on us last September. Krzysztof peppered me with questions about my tone and killer guitar rig. When you are with Victor Czura, be ready for lots of photos! He gave us a tour of the radio station, and we had a hearty meal.

Victor, Ewa, Krzysztof and the Band in Rzeszów

After a good night's sleep at the Hotel Prezydencki, we drove to the nearby town of Bochnia, where we did some sightseeing and Eric had time to feed the birds.

The gig that night turned out to be in a theater- a movie theater, actually. They blew up a picture of me for us all to sign for a fundraiser- but it was a bit strange to play next to a giant poster of myself on the stage...

With Piotr Lekki and the crew in Bochnia

As usual, we had a blast. We sold the last of our t-shirts, and only had a couple of CDs left for our final show of the tour in Kielce.

As I have said in this blog, you never know what to expect when playing over here. From tiny bars to theaters and outdoor festivals to what looked like a bomb shelter, it is always interesting. Our final gig was in a restaurant/bar in the bottom of a glitzy new shopping mall.

If you're really hungry, order the whole band.

We were happy to see many familiar faces from our last show there in September. They are so happy to greet American bands that travel all the way to their country, and treat us with enthusiastic respect. Poland will certainly be on the itinerary for all of our European tours.The next morning we had a long drive ahead of us- we had to return the gear to Ralf & Kristin's in Cologne, and the drums to Anko & Helga's place in Vreizenveen. The sun was out, and we had a pleasant drive through the Polish and German countryside. One thing to take note of: since the formation of the European Union, the old border inspection stations are gone. You can just keep the pedal to the metal! Stopping at border crossing would add many many hours to our journeys. We made it to Hannover, Germany in about 7 1/2 hours and look what was there waiting for us!

The Beer at the End of the Rainbow

Thanks to everyone who supported us on our fifth European tour. We are already making plans for a bigger tour in the summer of 2016, so stay tuned. In the meanwhile, our fourth studio album, Skin and Bones will be out on October 16th. Until then, put in your favorite Dudley Taft CD and crank it up!